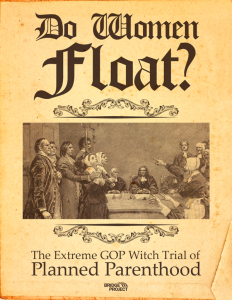 Despite a grand jury ruling the videos released by the radical, anti-choice group, the Center for Medical Progress, were doctored and manipulated, the panel is resuming its investigation to mount the Republicans’ campaign to permanently defund Planned Parenthood, and ultimately eliminating a woman’s right to choose.

Below are brief summaries of the members’ public statements and actions: