Charles and David Koch pour hundreds of millions of dollars into our political system to advance their self-enriching agenda and elect their puppet candidates. At the national, state, and local level, the Kochs use their unlimited resources to influence policy to suit their political and personal needs.

For decades, the Kochs and their network of dark money political front groups have been pushing the Koch agenda in New Hampshire — perhaps more than any other state in the country— which has benefitted billionaires like the Kochs at the expense of Granite Staters.

Today, Bridge Project is releasing a new report, The Koch Brothers’ Granite State Project: How The Radical Agenda Of Out Of State Oil Billionaires Has Hurt New Hampshire, which lays out the scope and motivations of the Koch network’s actives and influence in the Granite State.

The new report, which you can read here, delves into:

This week, Bridge Project is on the ground in New Hampshire to roll out the new report and briefing activists and partners on how the Koch agenda hurts New Hampshire. 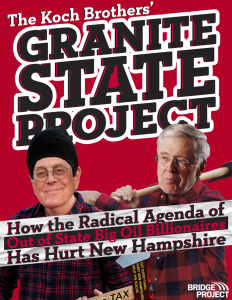