As the country marks the ten-year anniversary of Hurricane Katrina and the devastation that came with it, Bridge Project is releasing a report that delves into Koch Industries’ role in the most expensive natural disaster in American history. The report explores how the company both contributed to the damages and took advantage of the situation to increase their profits.

The Koch brothers’ driving philosophy is to put their business interests ahead of everything else — as long as they’re growing their bottom line, nothing, and no one else, matters. Bridge Project’s report entitled, “Ten Years Later: A Look Back On The Koch Brothers & Hurricane Katrina,” looks at how that philosophy compounded the effects of Hurricane Katrina. The report also covers their more recent efforts to push policies that can be detrimental to residents of high risk flood areas.

The report looks at: 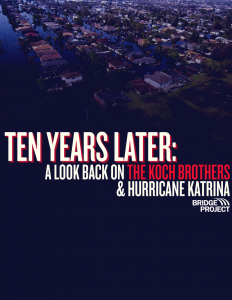