The Kochs Have Spent At Least $44 Million to Hijack Wisconsin

Milwaukee, WI—For the 2016 election cycle, Charles and David Koch have announced they are on track to spend nearly $900 million to elect politicians that would push their self-serving agenda. In Wisconsin, the Koch brothers have spent more than $44 million since 2010, helping to foster the rise of Gov. Scott Walker, Speaker Paul Ryan, Sen. Ron Johnson, and to fund political astroturf groups to carry their water.

“What the Kochs are doing in Wisconsin is emblematic of what they’re doing across the country, all their political efforts and PR shams boil down to self-interest and higher profit shares,” said Eddie Vale, the Vice President of the Bridge Project, the group who released the report today. “And in Wisconsin, the Koch brothers have helped create one of the worst governors who has allowed the hazardous pollution of our rivers and waterways, not to mention how they’ve been behind the attacks on working families in the state.”

The Koch network has invested heavily in lobbying to directly assert their influence on the state’s policy agenda. Since 2010, the Kochs have spent $2.6 million lobbying on dozens of pieces of legislation to further their corporate agenda at the expense of Wisconsin’s workers, environment, students, and families. In addition, the Koch astroturf network has been on the frontlines fighting for some of the most regressive political efforts in Wisconsin in recent years. They pushed for devastating anti-labor efforts including the silencing of workers, eliminating the prevailing wage, and preventing a raise of the minimum wage. The Koch-backed ALEC created dozens of pieces of boilerplate legislation, many of which have been incorporated into Walker’s radical education agenda. They fought tooth and nail to turn the state against healthcare reform and block the implementation of the Affordable Care Act. And finally, to protect the full profit-generating capacity of their Wisconsin operations, the Kochs have railed against the EPA and renewable energy development while simultaneously praising the Keystone pipeline and open pit iron mining. Absolutely nothing in Wisconsin could deter the Kochs from their selfish objectives. Their agenda proves that they are willing to compromise the lives and livelihoods of Wisconsin families, and their record shows that they would even stoop so low as to malign Native Americans and target minority and student voters in fraudulent schemes to achieve their full objectives.

“The Kochs are cementing their imprint in Wisconsin this year. Already, they have given more than $500,000 to Speaker Ryan’s leadership PAC and are providing cover for Sen. Ron Johnson, who has benefited from millions spent on ads and contributions from the Koch network for his hotly-contested reelection bid,” said Vale. “Their investment this year will only help Scott Walker who has announced he will seek a third term as governor. Wisconsinites can expect to see “Kochs Spending Tons MORE Cheddar Badgering America’s Dairyland.” 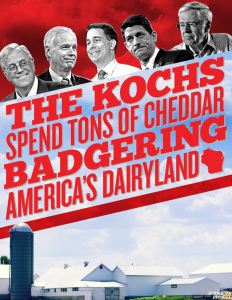