“It’s the guns & ammunition industry that run the NRA and the GOP agenda, pulling the strings in Congress to block commonsense gun safety legislation, not everyday gun owners.” 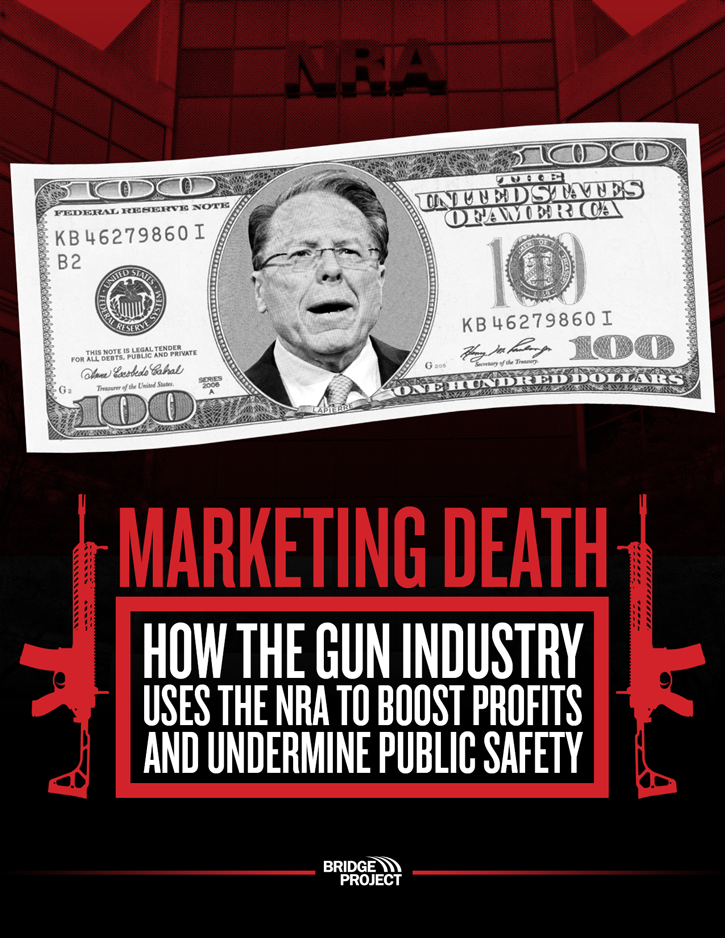 Washington, DC—After this month’s mass shootings in Orlando, and along with the demonstration by House Democrats and Senate votes last week, most of the news coverage has rightly shined a spotlight on the National Rifle Association (NRA) and its obstructive role in preventing any commonsense gun safety legislation from becoming law. Bridge Project released a new report today, “Marketing Death” which reveals how the NRA’s advocacy agenda is more about protecting the profits and bottom line for the gun and ammunition manufacturing industry than about commonsense gun safety that the majority of Americans—and gun owners—support.

“The $13.5 billion-a year gun industry is the real culprit behind Republicans in Congress refusing to do anything to stop gun violence, allowing random mass shootings that murder innocent people and threaten our families and communities,” said Eddie Vale, Vice President of American Bridge 21stCentury. “Republicans are always trying to invoke how they are defending the rights of America’s gun owners, but it’s the guns and ammunition industry that run the NRA—and therefore the GOP—putting the industry’s profits ahead of commonsense gun safety legislation.”

American gun owners feel the national gun industry lobby is out of touch with most gun owners. Forty-nine percent of people who live in gun-owning households told a Pew Research study that they favor a ban on assault-style weapons. The NRA adamantly opposes and lobbies against any form of background checks for gun buyers, yet according to a Public Policy Polling survey, 62 percent of gun owners don’t agree with the NRA. In the same poll,59 percent of gun owners believe the NRA has been “overtaken by lobbyists.”

The NRA’s board of directors is filled with gun manufacturing executives, lawyers, and lobbyists. The NRA First Vice President is Brownells Inc.’s CEO, Pete Brownell, who leads the “world’s largest supplier” of gun accessories and gunsmithing tools, which includes the so-called “cop killer” bullets the Bureau of Alcohol, Tobacco and Firearms proposed to ban. Brownell, who has donated at least $1 million to the NRA, said that having gun industry leaders as NRA directors “ensures the NRA’s focus is honed on the overall mission of the organization.”

Vale says, “We saw the NRA’s stranglehold on Republicans last week. Paul Ryan shut down all efforts in the House to act on gun safety measures that the country is calling for, while GOP leaders in the Senate introduced sham legislation that would do little to prevent another mass shooting or make it impossible for suspected terrorists to get their hands on guns. Republicans going home for the July 4th holiday should be prepared to explain to their constituents why they’re cowering to the NRA and the guns industry and willing to risk Americans’ safety.”

The gun industry is the clear winner of the NRA’s push to weaponize America, while the American public sees rising gun violence and deaths. Gun manufacturers’ stocks have risen 300% since the beginning of the Obama presidency, fueled in large part by the NRA pushing conspiracy theories, fear of losing gun rights, and finding loopholes for easier access to deadly weapons. With little accomplished in Congress on gun safety or accountability, it’s clear that the gun and ammunition manufacturing industry has found a powerful and lucrative voice in the NRA.