As the House takes up new legislation about the financial crisis in Puerto Rico, lawmakers will be tested: Will they help Puerto Ricans in the Commonwealth recover from the $72 billion budget shortfall to rebuild their economy, or will they let billionaire investors from the Koch network pull their strings and block any relief to the island?
The Bridge Project is releasing an updated report today, “The Kochs’ Wealth vs The Commonwealth of Puerto Rico” about how the Kochs sided with debt vultures over Puerto Rican families. The report gives an overview of the financial crisis, past due dates where Puerto Rico defaulted and upcoming payment deadlines that the Commonwealth will again default on if Congress does not act fast.
Included are descriptions of the various Koch-backed front groups that have tried to delay and block solutions to help Puerto Ricans, resulting in forced school closures and American citizens in Puerto Rico being cut off from health and public services. It also lists the hedge fund investors who are associated with the Koch network that have exploited the financial crisis for profit gain, and have the most to gain or lose depending on what Congress ends up doing.
Will Congress help Puerto Ricans turnaround their economy or will the billionaires in the Koch network force them to hold out to help their bottom line?
Check out the full report here. 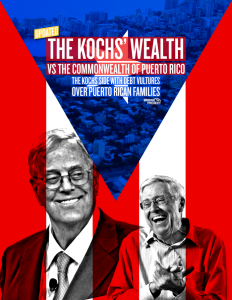