U.S. Supreme Court To Rule On Texas TRAP Law, But It’s Only One Part of Anti-Choice Groups’ Radical National Agenda

New Report Shows How Texas Anti-Choice Groups and Donors Are Determined to End a Woman’s Right to Choose Nationwide
Washington, DC—Today, the Bridge Project and NARAL Pro-Choice America released a new report, “It’s a TRAP! How Anti-Choice Groups Have Used Texas to Push a Radical National Agenda,” about how Texas Omnibus Abortion Bill, known as HB 2 was designed to ultimately eliminate women’s access to abortion procedures by placing strict restrictions on providers and medical clinics. Now Texas HB 2 awaits a ruling by the U.S. Supreme Court on whether the Texas law imposes unconstitutional restrictions on a woman’s right to choose.
“Doctors and medical professionals agree that Texas TRAP law restrictions are “unnecessary” and in fact, endanger women’s health and safety,” said Anne Shoup, National Director of Bridge Project. “HB 2 is only a stepping stone for these anti-choice groups in Texas. Regardless of how the Supreme Court rules on HB 2, these groups and their donors are determined to take whatever measures necessary to block women’s reproductive rights.”
“What we saw happen in Texas is a blueprint for what the anti-choice movement is trying across the country – using secret groups and dark money to push their extreme and out-of-touch agenda. They are using these groups to push sample legislation based on misleading information, and consistently foment an atmosphere where lawmakers feel comfortable to push legislation that harms women and families,” said Sasha Bruce, Senior Vice President of Campaigns and Strategy at NARAL. “This is a fight for the freedom and the autonomy to make decisions about our own bodies and our own lives. This is a fight for equality and dignity for over half of the population. This is what our opposition fights against, and by exposing who they are – and what their real agenda is – we can fight back.”
HB 2 is considered a Targeted Regulation of Abortion Providers (TRAP) law, laws that make abortion so difficult to access it is effectively eliminated. Similar legislation masquerading as health and safety laws have been passed by state legislatures across the country, and has become one of the many vehicles used by radical groups and their extreme right-wing donors to take away a woman’s right to choose. No matter how the Supreme Court decides, groups such as the Texas Right to Life continue to promote and lobby for anti-women, sham legislation that put women’s lives in danger.
Shoup says, “This report may only highlight Texas’ anti-choice groups and its donors, but there are groups like these in dozens of states, and they’re all a part of the Republican Party apparatus that is hellbent on ending reproductive rights for women.”
Read the full report here: 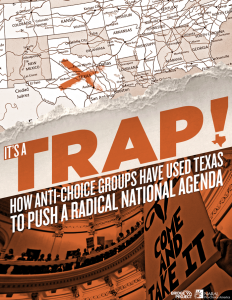