The GOP’s Politicization of Their Constitutional Duty 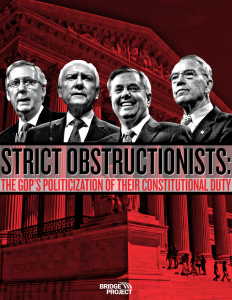 Not even an hour after Justice Antonin Scalia’s death was confirmed, Senate Majority Leader Mitch McConnell announced that Senate Republicans would forego their governing duty by refusing to replace the Supreme Court justice while President Obama was still in office.

Falsely claiming that there had never been a Supreme Court nominee confirmed in an election year, McConnell demanded President Obama to not nominate a replacement for Justice Scalia, vowing to not hold hearings on anyone the president put forward.

Senate Republicans were quick to fall into line behind McConnell, including the entire Senate Judiciary Committee, led by Iowa Senator Chuck Grassley. High-ranking Republican senators have said they would not even meet privately with an Obama nominee.Aiding and abetting in this unprecedented obstruction is a bevy of conservative groups, backed by billionaire funders.

Leading the opposition to fill the vacancy is the ironically named Judicial Crisis Network, a Koch-backed organization. When President Bush was in office, JCN had the same acronym, but a different name and purpose – the Judicial Confirmation Network. At the time, it advocated tirelessly for ending “the obstruction of judicial nominees” and called on (Democratic) Senators to “recognize the right of every nominee sent to the full Senate to receive a full and fair up-or-down vote.” JCN is joined by several lesser-known groups, particularly several funded by the Koch network and a variety of anti-choice organizations. These groups are desperate to keep the High Court to eight members for the next year and save the vacancy for a Republican president to fill, hoping that he or she will nominate a judicial activist who will overturn Roe v. Wade, gut environmental regulations, and wipe out workers’ rights.