As Pope Francis arrives in Washington, Bridge Project is releasing a new report titled, “A Koch Confessional, Or How The Kochs Have Attacked Pope Francis While Pushing A Self-Enriching Agenda That’s On The Wrong Side Of The Holy Father.”

The Kochs are terrified of the pope’s teachings because they threaten what the billionaire brothers worship most, their bank accounts. Bridge Project’s new report, reveals how the Koch network has attacked Pope Francis and targeted his teachings on the economy, immigration, climate change, fair pay, and more.

At the crux of the differences between the billionaire Koch brothers and Pope Francis is their starkly contrasting world views. While the pope has pleaded for his followers to reject the “trickle-down” policies championed by billionaires like the Kochs, and pushed immigration as a “hallmark for our society,” the Kochs have used their network to combat the pontiff’s statements with their own rhetoric.  From espousing the positive effects of “entrepreneurial American capitalism” to arguing that CO2 emissions “reduce poverty in developing nations,” the Koch network has attempted to get ahead of the idea that “the kind of unregulated capitalism that the Kochs promote runs counter to church teaching.”

The Koch-funded Heartland Institute has become “the headquarters for the U.S.-based opposition to Pope Francis’ climate change plans.” Heartland sent a team of scientists to Rome before the encyclical was released “to inform Pope Francis of the truth about climate science,” and has since joined a coalition “challenging the Pope’s view on global warming and the nature of capitalism.” Just last week, ahead of the pope’s U.S. visit, Heartland equated his environmental views with pagan “nature worship”. 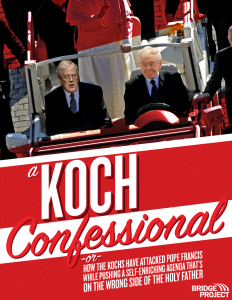