Marco Rubio is releasing his plan to partially privatize veterans healthcare today at a West Des Moines town hall event put on by Concerned Veterans for America, Charles and David Kochs’ “veterans advocacy” front group. The event will be all about shoring up Rubio’s “pro-veteran” credentials, but the truth is the Kochs and CVA — leading advocates of privatizing the VA — don’t have veterans’ best interests at heart. Case in point: Almost two-thirds of veterans oppose VA privatization, but that isn’t stopping the billionaire brothers from passing it off as a pro-veteran plan supported by the individuals they claim to represent.
It’s the Kochs we’re talking about, so that should come as no surprise. As revealed in a Bridge Project and VoteVets.Org report, “The Vets Group That Fights Against Veterans,” CVA promotes extreme, right-wing polices that stand in opposition to nearly every other veterans group. From pushing a plan to privatize the VA health care system to proposing a transition from the current military retirement system to a private 401(k)-like plan, CVA follows the radical conservatism of the Koch brothers, working to advance the billionaires’ self-interest at the expense of veterans.
Despite the Kochs’ protests to the contrary, CVA is first and foremost a political tool: The front group’s CEO, Pete Hegseth, has said as much. CVA is just another cog in the Kochs’ political manipulation machine. Like the brothers’ other front groups, CVA helps collect voter information which is then fed back to the brothers’ for-profit voter file data firm, i360, which contracts out access to GOP candidates and the RNC.
Read “The Vets Group That Fights Against Veterans” here: 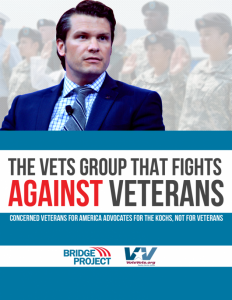