This Thursday, all eyes will be on Pope Francis for his historic and much anticipated address to a joint meeting of Congress. But before the pope arrived in the United States, Republicans already started picking fights and attacking the pope’s teachings.

In advance of the pope’s address, Bridge Project is releasing a new report titled, “The Elephant In The Room: The Pope Address A GOP-Controlled Congress Opposed To His Progressive Values.”

Since the start of his papacy, Pope Francis has signaled a shift in focus for the church towards protecting “the least of these,” whether it’s through the stewardship of our environment or addressing income inequality and providing a livable wage. Republicans’ policy views continue to move further and further to the right, and the pope is finally calling them on it. 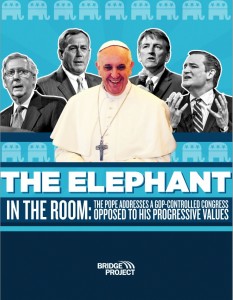