In advance of the House Trumpcare vote, Bridge Project is releasing a new ​digital ​ad that blasts Donald Trump for violating health care promises he made to the American people on the campaign trail.

This ad, “Was Anything He Said Not a Lie​?​” contrasts the assurances Donald Trump made to voters – that he would deliver better, cheaper health care for “everybody” – with the consensus among independent experts that Trumpcare would take health insurance away from tens of millions of Americans, as well as make health care costs spike for working and middle class families, seniors, and rural Americans.

The ad also highlights that many assessments show Trumpcare would disproportionately harm his own supporters – and shows Trump acknowledging this.

“Trumpcare betrays millions upon millions of vulnerable Americans that Donald Trump pledged he would help. This plan would kick millions off of their coverage – even more so than if Republicans simply repealed Obamacare outright without the guise of a replacement.  And it would all be done to just give the wealthiest Americans billions in new tax breaks – including Donald Trump himself,  That’s a recipe for disaster and if Republicans proceed, the public will hold them accountable,” said American Bridge President Jessica Mackler.​

To view, “Was Anything He Said Not a Lie?” click HERE.​ 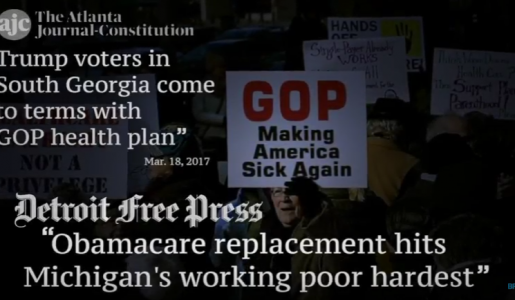